In a brief Twitter post, Maynard James Keenan made if official that the new Tool album will be out on August 30, 2019.

As reported, the band shared the date on the video screen during a recent live show, with Maynard prompting the fans to share the news. The group later shared the same animation, along with the number 2019 written in Roman numerals.

However, some fans still remained skeptical. Maynard now took one of the memes circulating the web, telling fans who are wondering if the album is really dropping on August 30: 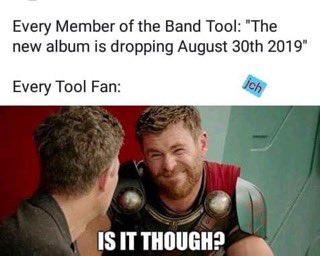 Here Are The Latest Articles
News

Paul Stanley has lost his cool lately on a fan who accused him of not being able to sing KISS songs live.   Here is what Paul Stanley wrote to announce the release date of his new album ‘Soul Station’: “Now And Then will be [...]

Finally, MÖTLEY CRÜE is celebrating its 40th anniversary this year.   With the rest of the members releasing statements on this auspicious moment, Mick Mars shared a new photo probably related to his highly anticipated solo [...]

Finally, MÖTLEY CRÜE is celebrating its 40th anniversary this year.   Here’s what the band members said on this auspicious day: Nikki Sixx: “40 years ago today in 1981 we started @motleycrue outta Hollywood [...]

As reported earlier, ICED EARTH guitarist Jon Schaffer has been arrested by the FBI for inciting a riot at the U.S. Capitol.   Here’s the update from the FBI: According to the FBI, ICED EARTH‘s Jon [...]

ICED EARTH guitarist Jon Schaffer has been taken into custody in connection with the insurrection at the U.S. Capitol.   The musician, who resides in Columbus, Indiana, turned himself in to authorities around 3 p.m. Sunday [...]
Copyright © 2020 Metal Wani, All Rights Reserved.
Lovingly Crafted by LUBUS